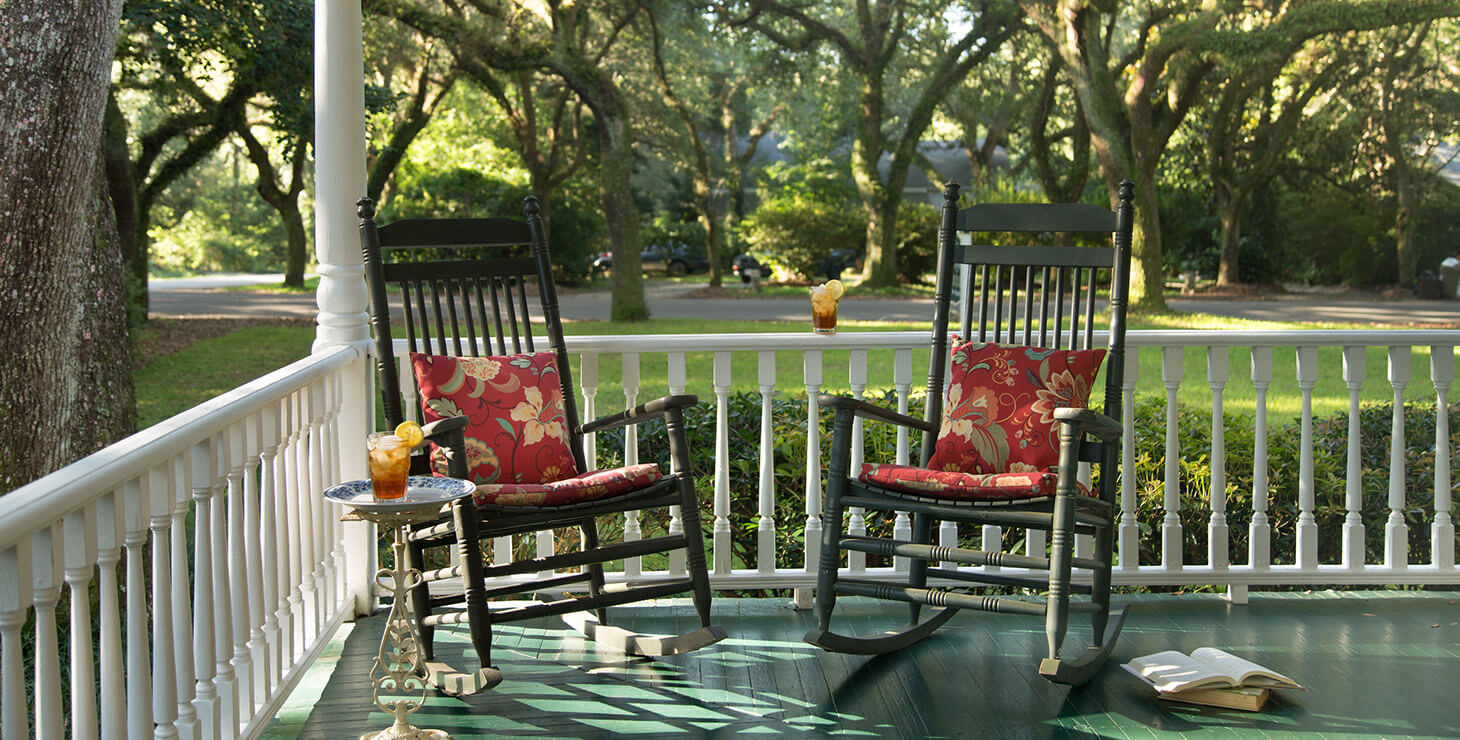 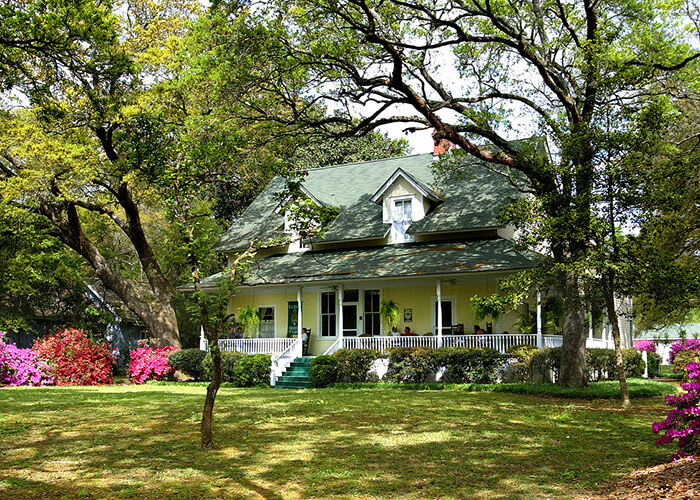 Nine miles north of Gulf Shores/Orange Beach lay an oasis called Magnolia Springs, Alabama. Off the beaten path in southern Baldwin County on an avenue of stunning live oaks, Magnolia Springs is the last community with year-round mail by boat on the Magnolia River; a lazy river that flows through Magnolia Springs into Weeks Bay and on into Mobile Bay.

You haven’t seen Magnolia Springs except in a G-rated movie or in your dreams and it will pull at your heartstrings; A gem of a community anchored by Magnolia Springs Bed and Breakfast and an excellent place to spend your Alabama Coast vacation! The tranquil atmosphere inside and out is matched only by the hospitality. The townspeople are so friendly and appreciative of your business. Enjoy your mornings on the front porch as you awaken to walkers and joggers waving and calling out “good morning” as they pass by.

Our bed and breakfast near Gulf Shores is rich in history and offers incredible Gulf Shores lodging. The hosts have worked to match your accommodations and experience to that history. Painstakingly restored to a magnificent level, it is obvious that great care was given in the restoration and maintenance of the property. The woodwork is quite spectacular and a visual delight. The house is in pristine condition and is a superb hideaway offering plenty of spaces to find a quiet spot for reading or reflection. The house is a model of what an “Old Southern Home” should be; an amazing retreat complete with all the modern conveniences one would expect. While rustic to reflect the period, the décor is immaculate and polished. Pictures can never do this house justice, so get ready…your entire experience is a feast for the senses!

Each room has individual character while all sharing that same cozy feel, tastefully decorated, spacious and offers big comfy beds that swallow you in luxurious quilts, soft high thread count linens and pillows. Rooms are equipped with fans and white noise machines offering a deeper sleep than you have had in years!

Then awaken to a gourmet flair that you’d expect from a world class B&B, not in its formality, but in its presentation and quality. Great care is given while preparing from scratch a three course breakfast that will have you extending your stay just to experience another meal! From the fruit plate to the main course and then dessert, it is a breakfast fit for a king. Breakfast fare is served at the guests’ leisure from 8-10am. 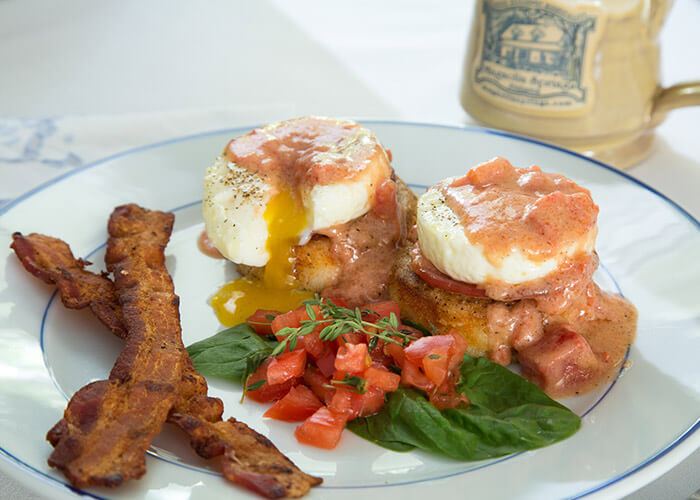 If you are seeking relaxation, cleanliness, and magnificent breakfasts, the inn offers a hotel lodging alternative in Magnolia Springs, Alabama. 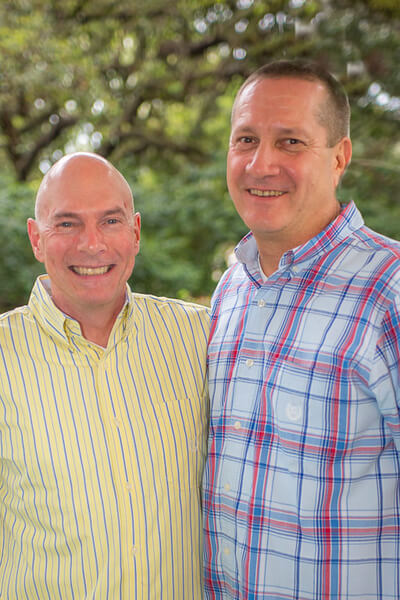 David Worthington and Eric Bigelow grew up in Northern Alabama and have spent most of their lives serving the public. They first worked together in 1981 at a local restaurant. They quickly realized that they worked extremely well together. Working “in-sync” they would accomplish what would normally require a team of 4-5. It was obvious from the beginning that they were great co-workers, paid great attention to detail and shared a passion for taking care of others.

David’s Aunt Shirley traveled abroad in Europe and returned with stories of unique small inns where she had stayed. Even as a child, this sparked David’s interest. Since a young age he has loved old homes and southern architecture. In 1978 David started his career in the restaurant industry and worked in that field until 1990. David then traveled the Southeast from 1990 to 1996 while working for his uncle’s insurance company. He stayed at many B&B’s taking notes on what to and what not to do. David has served on local Chamber and CVB boards. He also served as president of the Bed & Breakfast Association of Alabama as well as committees for the Professional Association of Innkeepers International.

Eric assisted his father with operating the family business for almost 20 years learning everything from customer service, to bookkeeping, to business management. He also worked in several restaurants to sharpen culinary and customer service skills. Many years of experience are evident in every aspect of your stay.

David and Eric have been “honing” their craft for over 30 years, perfecting customer service, food service and how to manage a business. They saved for 15 years, read every book on the subject of B&B operations and attended local and national seminars. In 1996 they moved to Magnolia Springs to renovate the original “Sunnyside Hotel”, circa 1897. The “Magnolia Springs Bed and Breakfast” first opened in 1997.

David and Eric share a passion about the home that quickly spreads to their clientele. As two of the most attentive and engaging innkeepers imaginable, they will make you feel at home right away. These true southern gentlemen are a treasure of local history and trivia and they take great pride in the business, community and the area in which they live. Based on your individual interests they offer suggestions of where to go, what to see and do. A positive experience is their primary goal from the moment you arrive. Clearly their sign in the front yard boasts their motto, “Classic Southern Hospitality”!

Magnolia Springs, at the headwaters of the Magnolia River, is located in the southwest quadrant of Baldwin County, Alabama. From the earliest times, the small community has been accessible by small craft and steam packets. Originally, the Magnolia River was known as River de Lin, or River del Salto.

In 1800, the Spanish granted the tract of land, including what would become Magnolia Springs to Joseph Collins. Collins operated several turpentine stills in the area, and a small settlement surrounded them. During this time, a plantation home was built at the head of the Magnolia River.

When Union soldiers, now 20,000 strong, moved from Navy Cove to Spanish Fort in 1865, they passed near the mills. To prevent its capture, the owners burned the stills. The plantation home was spared. Six years after the war, in 1881, Mrs. Lizzie Breed purchased the land for 50 cents an acre. She and her son opened an Inn in the home named the Breed Hotel. In 1894, a large parcel of land along and back from the river was subdivided into the Lymans Addition of Magnolia Springs creating 52 lots, and several streets. 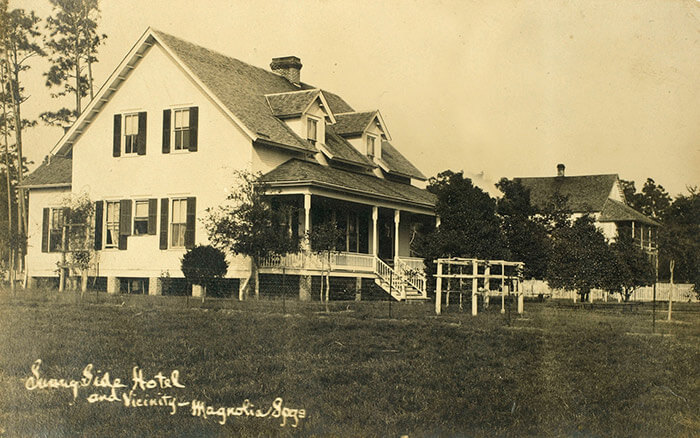 On July 31st, 1897, Christopher McLennan purchased lot 5 in the new subdivision, and began construction on a frame house. At this same time, several other lots were sold, and several large hotels were built. Two years after the homes completion, McLennan deeded this property to Edwin A. Bemis (the postmaster), but owned it again from 1902 until February 5th, 1909 when he sold it to Winnifred Corrigan. Mrs. Corrigan passed away in the last half of 1909. Her heir, Edward Corrigan sold the property to J.M. Gorman for $3,000 on December 12th, 1910.

Mr. Gorman, who was unable to pay the Corrigans led to a repossession of the property. The Corrigans then resold the property to William Henry Whittington Harding, and his wife Eliza on November 13th, 1913.

After Mrs. Harding’s death, the property was inherited by Mrs. Harding’s sister, and her husband, Mr. & Mrs. Arthur Cowen. The two ceased to run it as a hotel as they were very private people. It did however, still serve as the communities major meeting place and Sunday dining place until the late 1940’s, or early ’50’s.

The house remained a private residence and passed through several hands until 1980. Rita and Don McNair purchased the home and restored the structure that had been divided into a duplex. Mrs. McNair was a member of the Hadley family and her roots in the area reach back some four or five generations. She was raised in Magnolia Springs and introduced her husband to it. Because of the McNair’s efforts in authentically restoring the house, on May 11, 1983, it was designated an Alabama State Landmark. 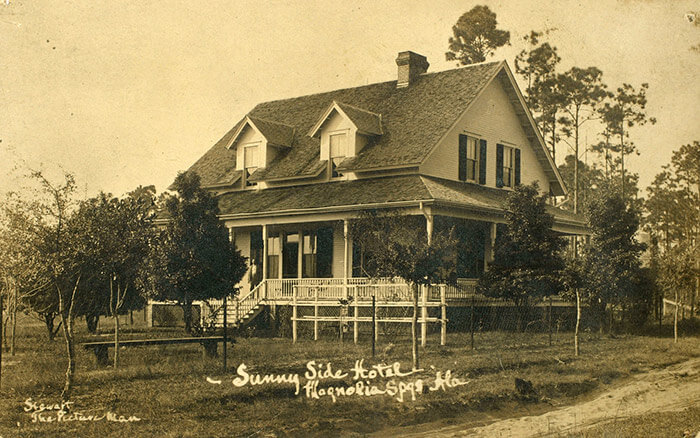 On December 13, 1996 David Worthington obtained the home, and turned it into a Bed & Breakfast. On March 14th, 1997 the house once again opened its doors to the public. From December of ’96 until March of ’97, all of the floors were refinished upstairs and downstairs. Central heat and air, as well as four bathrooms were installed upstairs. About 700′ of quarter round was stained and installed to tie in the newly constructed walls with the old. A new roof, septic systems, updated plumbing and laundry facilities to support the commercial use of the historic building were installed. The dining room was created out of two older parlors and the kitchen was updated with new equipment. Major work went into restoration/refinishing the pine beaded board and rare curly pine trim work seen throughout the entire structure. Since moving in David and Eric have spent countless hours removing 100 years of paint and caulk from the exterior and restoring back to original yellow color along with all the necessary wood work needed on trim, walls, porch, stairs and railings.